When we first developed the Academy team at HubSpot, one of my major roles was developing a framework for classes that helped educate customers in a one-to-many setting. I did a little bit of this at my previous job, but not nearly at the level I was about to embark on. So I did what any reasonable person would do — I turned to the internet.

There, I found a few articles on proper teaching frameworks or methods to help onboard customers, educate SaaS customers, boil difficult concepts down to easy-to-digest bits, etc. They helped (ish — more on this in a different blog post).

Now, three years later, if you do the same searches on Google, many articles will appear. You’ll see articles from TeachThought to SchoolKeep to Tom Tunguz. These websites, with their articles upon articles, are just the beginning.

However, my favorite emergence in the world of education is that recent research on the brain has uncovered new ways of learning that will change the future of education. This study says we should adapt to a new and improved kind of education that improves how we learn (based on what we learn about the brain) and teach people to understand their brain better so they can harness its true potential.

One of my new favorite authors David Rock does just that. He’s written books like Your Brain at Work and Quiet Leadership.

This post will dig into Quiet Leadership, something profound that I enjoyed learning about from David Rock. 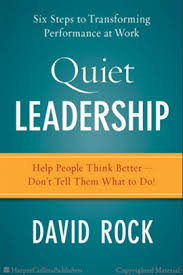 David covers how by being in a workplace, we should be accustomed to receiving feedback. But the problem with feedback is that when we provide it, it’s in the hopes that a person’s previous method of approaching a problem will change. Therein lies the problem. Research indicates that our brains are very very difficult to rewire once a connection has been made. It’s apparently much easier to create a new connection and use it as our new approach to solving problems than changing behavior.

So how does one encourage a person they lead to build these new connections?

By accentuating the positive and FeedForwarding (created and explained by Marshall Goldsmith, if you want to learn more).

Here are the six phrases and methods that a “quiet leader” may use toÂ  accentuate the positive:

What it sounds like: “I really appreciate you completing that report on time.”

Why it works: Large and small appreciations from a leader help people to feel safe. It shows that you acknowledge them and are thankful for whatever they’ve done — whether it’s focused on a project 100%, or just put something aside to focus in the moment of a conversation.

What it sounds like: “I can see youâ€™ve given this report a lot of thought and attention.”

Why it works: Validation is a form of communicating acceptance. It’s about recognizing another person’s efforts, feelings or even behaviors as understandable. It doesn’t always mean approval, but rather that you act supportive while potentially having a difference of opinion. Validation is also an excellent way to build trust in a team member. Trust in that they’ve done their job, and done it well. By validating their efforts, you can let them know you acknowledge what they’re doing and recognize they’re hard work. If you want to learn more about validation, there’s an excellent Psychology Today article on the six levels of validation.

Â What it sounds like: “Itâ€™s clear you are a very talented problem-solver.”

Â Why it works: According to a research paper that covers McEuen’s work, human interaction and personal recognition are essential to building an organizational structure and engagement. Recognition is important because people like to know where they stand and know that their work has positively affected others or the organization.

What it sounds like: “I think you deserve all the credit for this month’s project.”

Why it works: Think for a moment, when was the last time your leader said that to you? Most people will respond with either never, or not nearly as often as they should. Being a high-caliber leader means validating people’s hard work and declaring it well done and that they’re the ones who deserve the acknowledgment. Remember, each person you lead needs varying degrees and styles of affirmation, as pointed out in Hans Finzel’s blog post on the power of affirmation.

What it sounds like: “Itâ€™s great you took on this project, it suited your style.”

Why it works: Of course, we want people to let us know when we take on new projects or do things that “suit our style” or that advantage of our strengths. Confirmation lets people see what they are doing well, which can signal them to do more of it. Beware of just saying this to say it, though. You would never want someone you lead to head down the wrong path thinking that they’re fantastic with being organized when it looks like the Tasmanian devil character has gone through their PowerPoint or Excel doc.

What it sounds like: “Thanks for taking the time to focus 100 percent on this project.”

Why it works: â€œSilent gratitude isnâ€™t much use to anyone.â€Â  -G.B. Stern. If you appreciate someone’s effort no matter how big or small, be sure to take a moment to express your gratitude. Always be genuine, specific for the action that you’re appreciative of, and timely.

By taking the time to support and encourage your team continuously, you’ll begin to help them see their potential.

Have you found another method of accentuating and reinforcing noteworthy accomplishments? Share below!

2 thoughts on “6 Leadership Methods for Accentuating the Positive”